Under the “assignment of income doctrine,” an individual who has earned income and is otherwise entitled to receive it cannot escape tax on the income by assigning it to another person before the individual actually receives payment of the income. Where the doctrine applies, the individual is considered to have received the income as if it had been collected and then paid it over to the person who actually receives the income. In the case of a charitable contribution of income-producing property, the crucial question is whether the asset itself, or merely the income from it, has been transferred to the charity. Contributing only the income from property will trigger the assignment of income doctrine, thereby resulting in potentially devastating and unanticipated tax consequences to the donor.

Even if the income has not yet been fully earned at the time of a charitable contribution, the assignment of income doctrine will still apply where the whole asset is not transferred to charity prior to the time the earnings event ultimately does occur. This was the result in the recent case of Keefer v. U.S. decided one July 6th, where a donor claimed an over $1 million income tax deduction for a charitable contribution of a 4% partnership interest to charity prior to the partnership’s anticipated sale of a hotel it owned. Although the partnership’s right to income from the hotel sale had not yet vested at the time of the contribution, the donor did not contribute the entire 4% partnership interest to the charity but, instead, contributed only 4% of the hotel sales proceeds. The charity, therefore, would not share in the sale proceeds of any other assets sold by the partnership, but was limited to its 4% share of the hotel sale proceeds.

The court held that although the charity, not the donor, ultimately received the sale proceeds, the assignment of income doctrine applied so that the donor was treated as having received proceeds of over $1 million and was therefore taxable on such proceeds. This is in direct contrast to the result anticipated by the donor, which was that the hotel sale proceeds received by the charity would not subject the donor to tax and, in addition, the donor would be entitled to a substantial charitable income tax deduction. 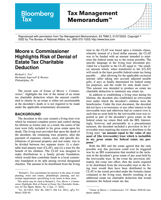 Please click here to read the article in its entirety.

This article was originally published by Bloomberg Tax. You can access the original article here.